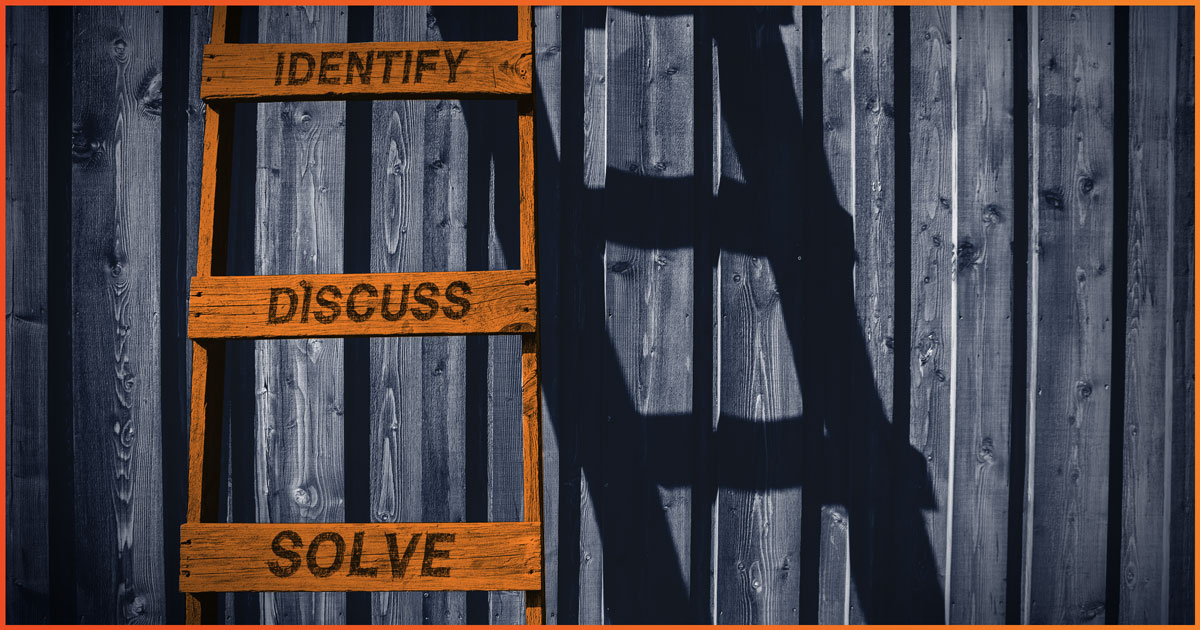 Before you can solve an issue, you have to identify the actual issue first. Leadership teams, especially when they’ve just started to learn EOS, will add symptoms to the Issues List. It can take some digging to get to the actual issue.

Problems can get tangled and create all new issues across multiple teams. By tracing back to the root cause of a problem, you can identify the real issue or the root issue.

For example, one leader may list “lack of growth” as an issue. But lurking behind that lack of growth you may find team friction, changing markets, or selling outside a company’s niche. If we determine team focus has shifted from the niche market, we can dig to find out why.

Now we can get on with the discussion part of IDS to fully understand the issue.

Only Discuss the Identified Issue

Sometimes in sessions, when I’m coaching a team to solve issues, they’ll stray from the topic at hand. They’ll dive into multiple competing discussions, piling onto the stated issue and wasting precious time. Instead of holding direct, open, and honest conversations, they circle the issue, afraid to say the real core issue.

Part of being open and honest means getting everything on the table but only saying it once. Saying anything more than once just becomes politicking. Everyone gets a chance to share their thoughts, ideas, concerns, and solutions to the real issue. No tangents allowed.

When you lead a team meeting, use these four steps to maximize your time, solve more issues, and get to the heart of things. Ask:

When you begin here, often everyone looks around the room. Until you know who you’re helping, the dialogue will only expand. Who will tee it up? One person. If additional issues come up from other people, note them and solve them separately, if needed. (Often, these superficial symptoms stem from the same issue.)

Note: Teams using the EOS One™ platform can identify the owner quickly because the software tags them when creating an issue.

Answering this simplifies who should participate in the dialogue. Anyone not named helps facilitate and keep the conversation focused. Everyone will have an opportunity to weigh in later. If the right “who” isn’t present, the person raising the issue should take it to them directly. Then you move on to the next issue.

3. “State the Issue in One Sentence.”

Ask the person to state the issue in one sentence and wait. Most importantly, do not allow more than one sentence or you’ll get off track immediately. This step requires discipline, but it will become a game changer. When people have only one sentence, they must dig, simplify, and say uncomfortable things. Forcing an issue into one sentence focuses their attention and limits what the team should discuss. Most people dislike this. They can’t politic or persuade. They must offer a focal point for dialogue. It’s magic and it works.

Almost as critical as step 3, ask the same person, “What do you want?” or “What would great look like?” Often people won’t have this answer or won’t readily provide one. Wait, it’s worth it. Their answer becomes the outcome or goal of having the discussion. When you don’t know what result to seek, it gets difficult to have efficient discussions. Once you know what someone wants, and everyone agrees on it, everyone must agree on a plan of action. The action step(s) must be clear, have an owner, and be added to a to-do list. The following week, the team will hold the responsible person accountable for having completed them.

While step 3 offers the origin, step 4 offers the outcome. When you focus dialogue this way, solutions readily become available. Even better, the stories, examples, and diatribes subside. It’s not easy, but it’s worth it.

PrevPreviousHow to Rock Your Priorities
NextThree-Steps to Meaningful Process ImprovementNext